The Royals from Monaco visit Fort Lauderdale...
Their Serene Highnesses Prince Albert II and Princess Charlene receive key to the city during a special visit to Fort Lauderdale's Aquatic Center ahead of its 2023 grand opening celebration.
The City of Fort Lauderdale welcomed Monaco's princely family, their Serene Highnesses Prince Albert II and Princess Charlene to celebrate the completion of the City's world-renowned Aquatic Center following a multimillion-dollar revitalization project. The center boasts one of the tallest dive towers in the world and state-of-the-art competition pools for both competitive and public use.
The plans for this visit began with Mayor Dean Trantalis' recent visit to Monaco where he met with dignitaries about the Aquatic Center project, the Fort Lauderdale International Boat Show, and other important commission priorities and investments.
"The renovation of the aquatic complex restores Fort Lauderdale as a premier destination for global competitive swimming and diving at a venue that is also available to the public. The visit by their Serene Highnesses of Monaco shows the global value we have achieved and the excitement that we are generating," said Mayor Dean Trantalis who is working to add Monaco to Fort Lauderdale's growing list of Sister Cities around the world.
Their Serene Highnesses have a keen interest in Fort Lauderdale's Aquatic Center and the adjoining International Swimming Hall of Fame (ISHOF). H.S.H. Prince Albert II is a 2011 gold medallion ISHOF honoree, and his uncle Jack Kelly Jr. served as the ISHOF president in the 1980s.
"We hope these ties will continue even beyond the celebration here today. We have wonderful plans of maybe getting one our major events both in Monaco and here in Fort Lauderdale, the Boat Show and the Monaco Yacht show, to collaborate in a much more fruitful way. We really look forward to all these opportunities," said H.S.H. Prince Albert II during his remarks at the event.

Additionally, H.S.H. Princess Charlene is a former Olympic swimmer and philanthropist who founded the Princess Charlene of Monaco Foundation in 2012 which includes, among its missions, saving children's lives by teaching them how to swim and educating them on water safety.

Their Serene Highnesses also reveled in celebratory festivities including a high dive off the top of the 27-meter dive tower by Braden Rumpit. There were also friendly swimming competitions comprised of Olympians, a Paralympian and student athletes.

"I could not be more honored for Monaco's Princely family to get a first look at what we've poured our hearts into over the years. The City of Fort Lauderdale is committed to continuing the legacy of the Aquatic Center and maintaining our position as the swimming and diving capital of the world," said Commissioner Steven Glassman who has been a longtime advocate for the Aquatic Center revitalization project and serves on the board of the International Swimming Hall of Fame. 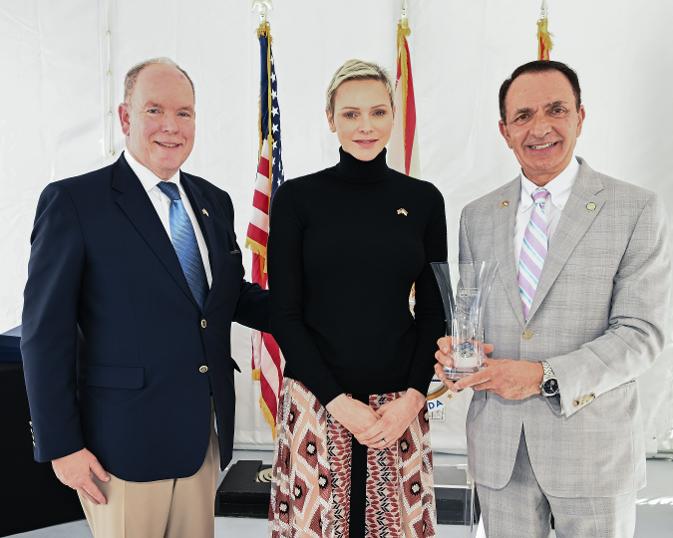